CES 2016: Netflix extends its service to almost all the world 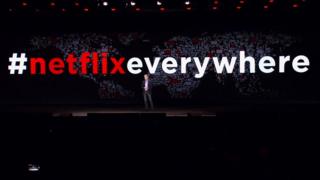 Netflix has gone live in nearly every country in the world.

The firm announced it had switched on its service in 130 additional countries.

It said it was still trying to expand to China. The other exceptions are North Korea, Syria and Crimea, where it is banned from operating by US law.

The announcement was made by the firm's chief executive Reed Hastings at his keynote speech at the CES tech show in Las Vegas.

The company's shares jumped to about 8% over their opening price following the announcements.

"We were expecting Netflix to go everywhere, but this has happened more quickly than we thought," commented Fernando Elizalde from the tech consultancy Gartner.

"Until now, the firm had been doing it in phased stages because of the costs of marketing and dubbing or subtitling the content.

"But it's worth remembering that in some of the emerging economies it will only be people in urban areas that will be able to use it because of limited internet availability."

Mr Hastings said Netflix was in talks with the Chinese government, but acknowledged it would take time to reach an agreement.

"It's a very large country, you know a billion Chinese that we want to give access to the Netflix content," he said.

"In China you need specific permission from the government to operate, so we are continuing to work on that and we are very patient."

But one company watcher had doubts.

"China is going to be a tough nut to crack given that that three strong domestic services already exist," said Mike Goodman from Strategy Analytics.

As part of its expansion, Netflix has added support for Korean, Chinese and Arabic to its list of supported languages.

That brings the total number – in which the firm provides subtitles, captions and alternative audio – to 21 languages.

Mr Hastings added that Netflix would initially focus on expanding the reach of its existing content rather than commissioning extra locally-made shows.

For consumers who already have Netflix, the biggest change may be the addition of HDR.

Many experts believe the impact is greater than that of just jumping from 1080p to 4K ultra-high definition resolution alone. One consequence of using the format, however, is that it requires more data, and few TVs support it yet.

The firm's rival, Amazon, began streaming a limited number of shows in the format in 2015.

Audience members at the Las Vegas event were also given a first look at some of the service's forthcoming shows, including:

Ironically, the clips were blocked for those watching a live stream of the event.

The firm also teased Chelsea Does…, a documentary series presented by the comedian Chelsea Handler that will cover topics including drugs, racism, marriage and Silicon Valley.

In addition, it announced Ricky Gervais was directing and starring in a film called Special Correspondents about a journalist who broadcasts fake war reports, which will be added to its library in April.

Mr Hastings also revealed some fresh statistics about the service.

He said it now served a total of 125 million hours a day of entertainment to its viewers, and had streamed 12 billion hours-worth of video over the final three months of 2015, which is nearly 50% up on the same period in 2014.

Wow, marvelous blog structure! How lengthy have you been running a blog for? you made running a blog glance easy. The full glance of your web site is wonderful, let alone the content!